Stories of long returns.
Some time is needed to understand that it’s still you, still only a few are the windows with pink balloons compared to the people who swarm on their bicycle among the street of the city centre. I started slowly, I admit, by now I know that I can’t take the first day of Giro as I usually do, without noticing that I go too fast.

There is the silent atmosphere of the colonnade which is similar to that of the summers in the province, when people go to the sea and three or four kids play in the main square holding a half melted popsicle.  A woman looks out from the windows of a bakery that seems brought out from the fifties, with the grit floor and the big and golden door’s handle like the grannys’ ones.

The flavour of a Mango milkshake, the smell of boxwood from the public garden and all the children lining up and screaming: “Cento, cento, cento”, the asphalt that melts under the mid-afternoon sun, Mirco Maestri’s last twenty seconds, all gathered in that smirk as if he wanted to take more time, a little bit more.  It’s such a bastard, you hate it and you love it and you hate it. Twenty-two seconds fragmented, the sprint flows as always until the end of the straight road, someone doesn’t even come back. They overflow with sweat on the handlebars, they would also pour some icing orangeade on themselves. 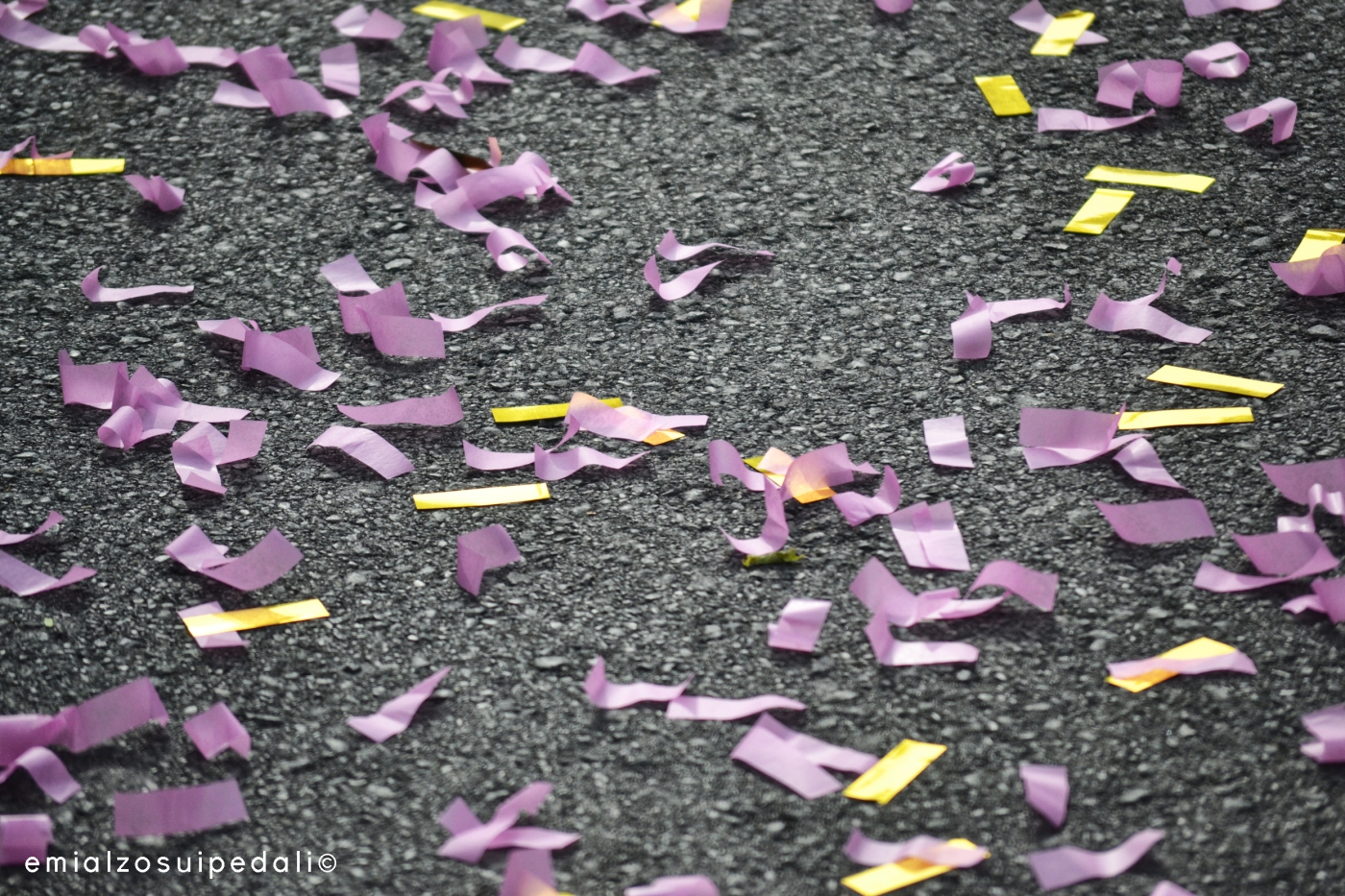 I meet people that I haven’t seen for months, with some of them it’s also been a year.
“You’re back” they say, “I wondered where you were”.
Honestly I don’t even know. But it’s always good to know that there is someone who misses you. I look at the golden confetti that shine and they mix together with the pink ones on the ground, they rise up in bunches, like hair in the air, like butterflies. A Colombian woman shouts “Gaviria, Gaviria” in a little red speaker, some others crowds on the barriers, they ask for a selfie. He gets closer, takes a random phone and he starts taking thousands pictures with them who are holding flags, shouting por favor. He is so quiet to be a sprinter, looking at him with those dark eyes your would never tell that he is one of those who brushes against elbows and barriers. But this is how it is, the road takes out the blood and the soul.

The countryside is calm at this time of the day, it slips out along the freeway. There is an abandoned red farmstead, with a big porticoed on the back. I look at it for a second and I build up ten daydreams about it. About summer, about the nights with the crickets when you don’t have anything to think of.
So little would be enough.