Mirrors.
I like the paddy fields when the weather is good, squares of ground that reflect the light-blue sky, the white and frothy clouds in a mid-morning. There is a sleepy tractor, without driver, which seems to sink slowly in the static water.  And a sudden flight of a heron, a few seconds’ show like one of those jerks in an uphill. Along the flat road that takes to Oropa there are pink ribbons in the wind, balloons, banners, a castle and a sunny countryside that seems to say that everyday is another day. During our life we spend the time starting again, even when we are not aware of that.

Pantani’s mountain is the symbol that nothing is lost. Story of an unaware return, when you don’t believe in it anymore but you don’t give up. There are the black and yellow flags that wave in the fresh air against the light-blue. The Pirata’s bend, Marco’s bend. A man with the Mercatone Uno’s t-shirt stops and he tells a story, his story about that t-shirt. I can’t hear it but I know he earns a glass of wine. Sangiovese, obviously. 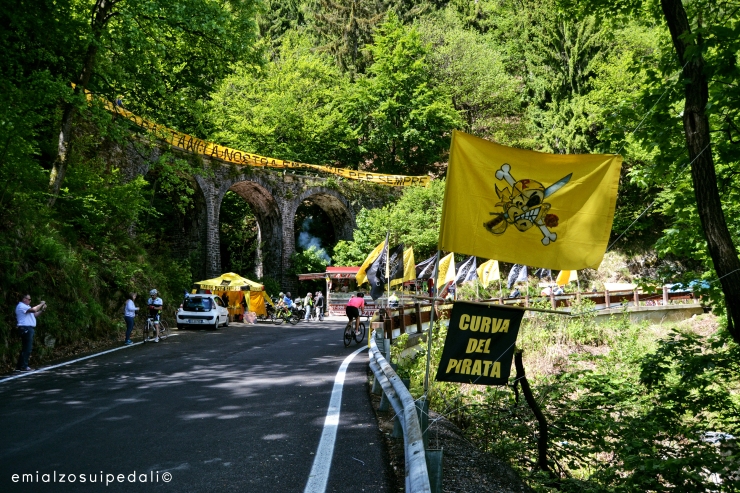 It’s how it happens, cycling consecrates the place and the people go there for pilgrimage, they meet after years as if it’s only been days or even hours. The sanctuary on the top, as it happens often, maternal protection for a road that is rarely friendly. The phone doesn’t work, you get used to not look at it anymore, to leave it in your backpack’s pocket, to look the light-blue Pidmont down there and to understand that sometimes you have to leave everything out, provided that the important stays in. Of the climb I like the heart or nothing, the finish line tells just a little about the travelled path, especially for the first ones, who forget the fatigue with happiness, everything transforms, the victory remains and then nothing else. Of the climb I like to find again the guardrail (and the friends) of three years ago, the three hundred fifty meters’ bend that has become our legend. To stay there in the middle with widen elbows to keep the space, with the humid air that rises from the woods to the back and the sun that comes and goes. Here you learn the holy things such as the wait and the patience:  you earn the best corner if you get there first and if you have the time and the perseverance to stay there, to not to abandon the lead. There are no excuses.

A woman shouts to a friend who is on the other side of the road and of the barriers that here is like staying on the tribune, instead they are in the stand. That if he wants she can sell him the ticket, three hundred euros. The joke meanwhile they grab everyone who has news about the race, not many verily. For some people there is still a breakaway, another says that the group is compact. Different ways of thinking, typical of the mountain, of the hours that flows like this, as if the clock would ticking stronger than usual. The road empties from the bikes, the people cheer to a crazy man who tries to jump over the barrier as in the “Olio Cuore” advertisement even if there is a half gully on the other side. The climb. They come. The people stick out, they shout random names, the pink jersey, Quintana, Landa, The mountain is the usual rumble, people who shout and stick out as if they want to follow the athletes. This is the blood of cycling until it’s heart, the relationship between who suffers and who supports, so thunderous and intimate, so true and eternal. So, until the end, thanks God, because the last turns of the mountain are deserved by everyone. Someone gives a high five, some others can’t take their eyes away from the handlebar or from another fixed point where to throw the last effort. None dares to overstep the barriers before the end of the race, strange but true.  It’s Oropa that makes a miracle, a benediction for each one of them. 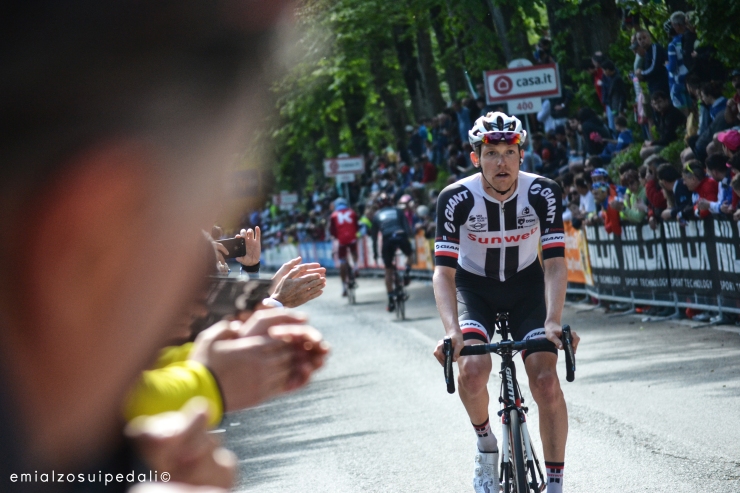 Then they all come back, like a parade that smells like beer, like cooked asphalt, like clutch  of the cars who went up and will start going down. The afternoon brushes sun’s spots above the field in front of the church, huge and grey and still against it’s mountains. There is even a harder tract afterwards, a man on the barriers told me, a narrow street that goes up to a shelter. More than two thousand metres. It’s never finished even when it seems to be finished. 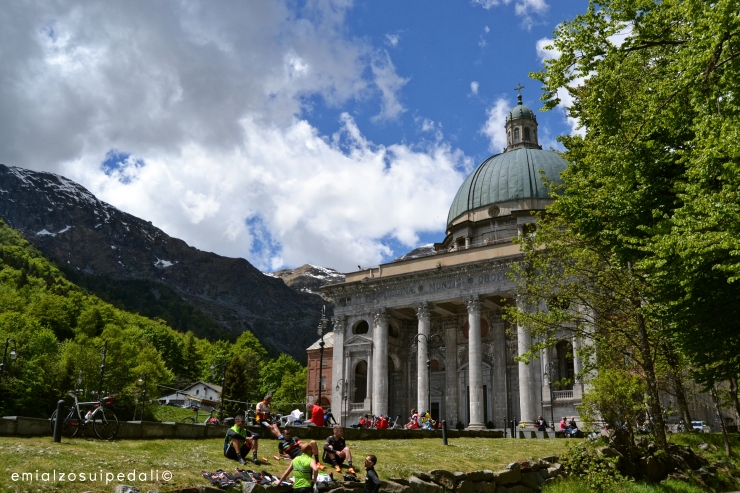 I go up and I squeeze against the people to go upstairs, someone gets angry and today more than ever I find it absurd. Tonight is not one of those night when you have to rush, for once. It’s  good also to stay in the middle of this crowd, with some sleepy children that speaks about cycling like adults do, that want to stay on his dad’s shoulders to see the team cars that go down.

The truth is that you’re still here, where the Basilica watched over your arrival as an unconscious winner, in the smell of the woods’ shadow on this climb. We will fail again, we will still get the wrong tactic, we will get cheated by the bad luck, we will fall without reasons and we will still look at the sacrifices get burnt because of a wrong day, But I beg the road to keep us clinging to her as a mother, that nothing takes us away from what we love. I beg the tenacity, the patience, the perseverance to never go away.