Outside the air shakes the pines’ peaks in this lost corner on the Chianti’s hills. It seems a fairy wood that has got the wood’s smell, the bark’s one. Little lights barely enlighten the gravel paths surrounded by the silence of a night that doesn’t seem of May.

In the end this is how it is the first meeting with the Giro. A clash, more than anything else, a sort of head-on collision at three hundred km/h. You get a bit upset. It is how it is. Because you have to be a bit used to speed.
This will never be a race like the others. You find its rhythm only living it, there are not excuses. There aren’t pauses, there isn’t a moment when you take a breathe. You find yourself between a wall and a barrier with the people on you from every side and you realize only later that it’s only a matter of getting used, like every time. You realize that, in the end, it is also the good part of it. Because none will ever tear off the memory of the Square in Brescia with all the people who were there to see Nibali and you could feel everything, also the heartbeat of the one who was beside you. It’s absurd. Then you understand that it’s amazing.
A lamppost, a barely empty restaurant with the tablecloth half in the sun and half in the shadow, the pink balloons, a dog that snoozes on the sidewalk, a cafè. Arezzo is a glimpse painted “on the fly” and not even really completed. The white and grey clouds, the distant green hills in the afternoon light. 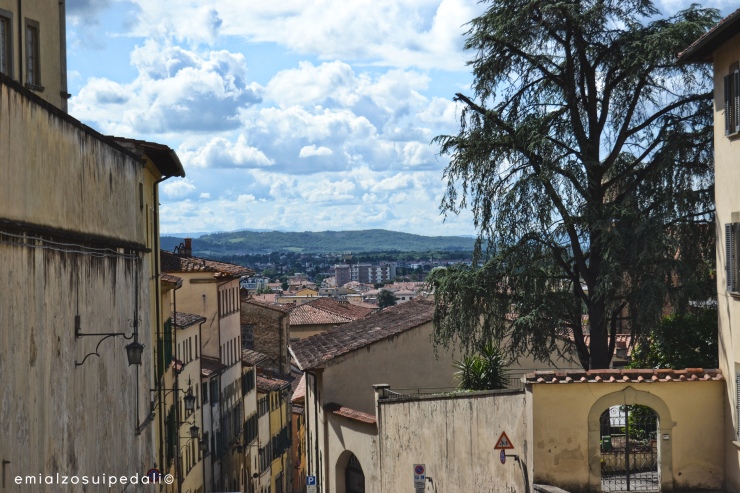 Arezzo is heaps of people and then it’s Gianluca Brambilla. The dust of the dirt path succeeded, somehow, in marking a destiny, as many times the cycling roads do. Dust that sticks on you with the sweat, a magical jumble. A ritual jumble. Everything goes back to its place today, The last Strade Bianche taught him that you can loose and be crazily loved. That courage can come back in thousand ways. That victories can be completely different from the ones we imagine and maybe, down under, remain the same.
The dust path taught it to him in the rude way of cycling. Without discounts, without tenderness, if not the of the public, of the people that learnt his name for that breakaway that was a dream. And today too, it has something to say.
It all adds up. The good, the evil, the indifference. It all makes sense. It does everytime. Somehow. This was the way, today. This time, the lesson, has the taste of some mums’ tenderness when they want to tell you that after all the reproaches they love you always, they love you forever.
Arezzo, this is one of those happy ending stories. Even if cycling doesn’t admit finals.

This is the fact. Speed tests us. Grabbing even just a little important thing in this entire whirlwind is our certainty that we won’t die of distraction. That we will still be able to be dragged but not taken away.

Goodnight, little frozen world lost up here. I really feel like I had crashed against a wall at three hundred km/h but like every good pilot worthy of respect I haven’t lost  the desire of feeling the speed flowing next-to me.