White like the double line after the circuit’s lap. The bell that tells the end. The sun in the eyes. The mute scream of Dege that at twenty-six years old has got his Paris Roubaix.
Black like the dust mixed with the sweat that draws the fatigue’s wrinkles on the skin. The holes in the moments when you have to be ahead. The turned soil beside the forest’s road. The backs of the others, the backs of too many.

White, like the nothing after the finish line, the space of an infinite second that is not needed to make you aware of what happened, rather to let the life flow again, the blood. Black like everything that there was before that instant of privileged ecstasy.

John Degenkolb has the same lost and shiny gaze he had in Sanremo. The same smirk that the fatigue leaves even after the finish line. He is the third cyclist in history who won Milano Sanremo and Paris Roubaix in the same year. Two monument classics.
He gives his son a flick, he takes off the helmet, he takes his face among the hands. It is not the same feeling of a few weeks ago. None is the same as itself. Maybe this one is different. Maybe he doesn’t even know why. Victories are like sons, you love them all indistinctly even if everyone has his own character. The Roubaix is evil and undisciplined nevertheless it resembles to one of those wild horses that everybody would ride to say that they have made a pact with freedom. White is this light that wraps the velodrome in the afternoon. White the smiles of the Giant’s guys that arrive one by one with the face of dust. Black is the invisible bitter of delusions that gather behind a happy Dege. Greg again on the podium but no highest step, with his kind and stern expression at the same time, the disappointed eyes, maybe incredulous for those lost metres. Greg who’s always stayed with the best ones, on the pavè that made the open elbows shake, the arms on the handlebars.

Sir Wiggo who tried the jerk like a bow’s arrow, making us believe that maybe the stones would have let him write a tale just for himself, of a serious cavalier, of impossible Chimeras’ discoverer.
Elegant baronet even in the harshest challenges, in the attempt to impress everybody till the end, maybe even himself. Daniel who didn’t lose positions not even for a second, shoulder to shoulder with his mate, ahead for the whole road that cuts in two the forest of Arenberg, to take those stones with gritted teeth like he entertained in his dreams of a child. Rocker betrayed by two bicycles and a fall. 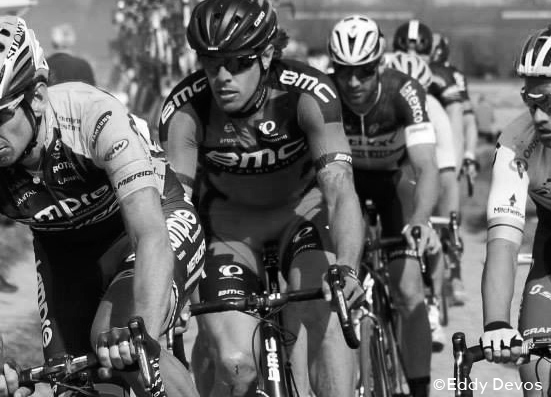 Matteo who comes back to his gruff love after the falls and he knows that at the velodrome a few months old baby that with his alert little eyes has seen the north for his first time and he starts loving it without speaking, is waiting for him.
Matteo who wants the victory to tell it to that baby that doesn’t speak yet but already know a lot. About the stones, about sacrifices. Peter who can’t find that golden kid who won everything and had to invent every time a different exultation. Prodigy who tries to go faster than the bad luck and the pressures.

Black the destiny of everybody minus one in this race that is insolent and worshipped daughter.
White the weight of the stone in Dege’s hands on the podium, rock torn from the North’s roads that he can bring home like those children who collect stones from the lakes’ bank to keep them as memories. The mates’ hugs, a hand that ruffles his hair kneaded with sweat and soil while to the microphones he says that he is happy but his eyes say that he doesn’t believe it yet. 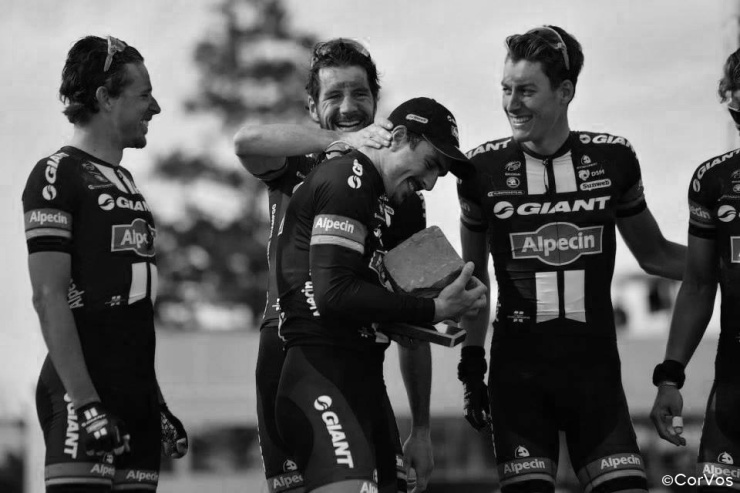 White the bar of soap that foams in the Roubaix’s showers. Black the whirlpool of dreams that goes away under the feet that were kept closed too many hours into the shoes. White the clouds under the tummy of a plane that leads towards home. Black the night above the forest that comes back without voice, evil and wonderful dream that you start to re-dream again immediately, after that white line. An instant, the time to shake themselves and to restart thinking of how much time is missed before the next time. “Still love that race” said Niki Terpstra after the finish line. Still love that race. White the eternal love carved on the black stones of the twenty-seven sectors that seem to be nothing and are everything. Hearts that you can hear just if you approach your ear, if you listen deeply. Even at a distance.