Luino and this its little hamlet sweetly bothered by the calm afternoon’s undertow. The lake and that stripe of sparkles gilded by the latest sun. The Hotel where tonight the BMC’s guys will sleep has light-blue shutters and an antique small walls that have been hearing the water’s breath for, who knows, how long.

I find Silvan Dillier seated at a small table with Valerio Piva and Fabio Baldato, his sport directors. I greet him, I tell him that I found some traffic, maybe I am late. He smiles, he shakes my hand and gets up. We go into the hall together, looking for a calm spot where we can talk about him, about this Giro. The dining room is desert and it seems to be dunk in the light-blue of the lake. A few tables are already set. We seat at an empty one. A waiter comes, he asks us if we’d like something to drink. No, I answer smiling, we have to do an interview. Maybe he mistook us with two clients and here it is easy: it seems to be on holiday.
I look at Silvan: His grey-lightblue eyes are even clearer, almost golden, with this sun that comes in from the windows. I ask him how he feels. Good, he answers. This stage from Tirano to Lugano was short and without too much stress.

This is his first big Giro, the first time into the vortex of a long race that lasts three weeks where everything has to be managed. Sometimes, even the emotions.
“I am really happy to run a big Giro for the first time, it is really special. Everything is new for me. Maybe it is a bit stressful but it is amazing”
He says it with naturalness. It is his first time, nevertheless Silvan seems to have always a huge dexterity in facing the situations day by day. “We are a big team” explains “And I am surrounded by good guys, both in the race and in the everyday life made of transfers and hotels. We came to the Giro to do well, even to fight for the GC and above all to center the stages”. He smiles, maybe he thinks at Gilbert’s victory under the Vicenza’s downpour, exactly as if it was the Cauberg.
But I want to know about him and I ask him of his breakaway during the Abetone’s stage. “Abetone…” replies, “Was it the fifth or the third day? The fifth, right? The first week I was still fresh, naturally, I was feeling good and it was great to be in that breakaway, above all because at the Giro is something completely different: you’re on television and million of people see you, there are the social, there is all this media movement around. It is really special.”
Special. He repeats it often. Be a cyclist isn’t certainly a job like another, above all everyone has his own way to face this life. Silvan smiles when I ask him if the bike, somehow, has transformed him or if it still transforms him. “For sure the bike changes you” says. “You start riding when you’re junior, you do it for fun, to enjoy the life, even to go to school. Then, when you become a pro, cycling becomes your life. All your life. New objectives born and you learn to focus on it, on the important things. You think of feeling good, of eating well. Then I am lucky because I like salad very much, dressed in every possible way. And even the fruit. It is my favourite food along with pasta: if there is a lot of pasta I am happy!”
He laughs.
The lake is still intense lightblue and it is still really warm because of that sun that comes in from the windows. We move to another table, in the shadow this time. The forecasts foresee still good weather for the next day and Silvan rises his shoulders, smiling: he hopes they are right. 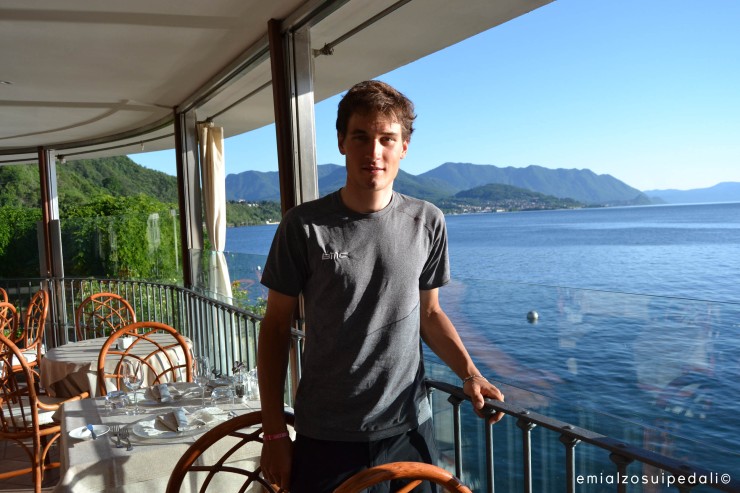 I ask him about Imola. After that stage ha wrote a tweet saying that on the track he felt like a F1 car. With a broken engine.
He smiles and explains that it was nice to ride in the circuit because it’s so different and strange compared to the usual roads and arrivals. “But the climb” says “was too tough so I ended up in the gruppetto” and makes a funny gesture with his hand. I’m curious to know if he follows the motoring but he says no, generally on Sundays he always has races and he is never at home so he couldn’t even have the occasion to follow the Gran Prix. 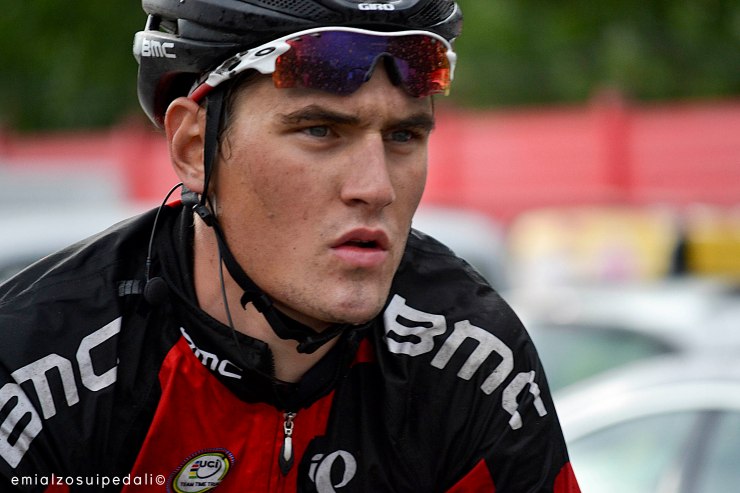 “Then” he adds, “I try to spend the free days with my friends, not at home. I like going out with them. But it is not so easy. Usually my free day is on Monday, when they work. So, maybe we meet at night. And we stay together, we talk, we drink a beer”
This life of a pro is not so easy to be wedged in the other’s people normality. You choose it because is yours, you feel it inside but you have to accept a deal: you are always a cyclist. “Twenty-four / Seven” says Silvan. “Since when I get up in the morning I think of how much I have to train, of what I can and I have to eat, of check my weight and many other things. And even at night, when you go out for a drink you know that you can’t go over, you can’t go back home drunk.”
He laughs and then he points the lake out there. “Indeed one of the reasons why I love my job is this: having the possibility to see wonderful places. Sometimes, in the hotels, there are SPAs or swimming pools and that is a way to detach from fatigue, from the stress of the race. I try to enjoy the life in every moment, as much as possible; I like the daily life with the guys of the team that are not just teammates but also friends”

Silvan is a golden boy. One of the BMC’s fellows that last year, at Ponferrada, conquered the gold on the team time trial. On the back of their bus there is a picture of that moment: six mates that bite the medal on the highest step of the world. An emotion that he will never forget.
He certainly has a particular feeling with the time trials.
“I’m quite good in the time trials but I don’t feel I am a specialist” says. He is humble. And this is a big gift for an athlete. “I like the short time trials, so that I can have as more benefits as possible from the path. Lately we are learning a lot, as a team, in this discipline, how to run, how to improve. It is a continuous growth”

About Silvan always strikes me his own way of doing the rollers. I tell him but maybe he doesn’t believe that he has a special and unmistakable aptitude. Focused and almost perfect, as if it was the real race and not just a no way training. And without headphones for the music. When I ask him the reason of this particular, he smiles and explains: “I like to hear what happens around, the voices, the people. And then I focus on my power control and I warm up. As always. I focus on myself, simple.”

He has to have a big mastery of his balance between body and mind. Looking at his profile bent towards the motionless arms on the appendages, with closed eyes, you would bet to know him in another dimension. Indeed he likes to hear the sounds around him. He hears them and meanwhile he focuses on himself. “I am not a complicated person” says “And I am not a maniac of the details, I prefer to concentrate on important things. In my opinion looking too much at the small things you risk to loose sight of the big ones, of the objective, hence”

Usually I don’t like to ask the next objectives, the usual “red circled races” but I care for the races of the heart. Maybe because when you are affectionate to a race it means that, somehow, in that there is something of you: because of the places it goes through or because of its character. Silvan waits a bit and then he says me more than one.

The Milano Sanremo, the Fiandre or the Tour de Suisse. Switzerland, his home. He tells me of his home race, the GP Gippingen that will be run in few days. “It is practically at my place” says “I hope to have a good condition after the Giro to do well” Thinking about after. It is strange for us that aren’t used to worry about the condition, about keeping everything under control. A cyclist is a cyclist always. While you ride on a road you already think about the one you will go through tomorrow. Present and immediately future. About this, about future, Silvan doesn’t tell me and maybe is even right not to know. I believe that he is a man who still has to be known deeply by the people. For now, he that has entered the professionals’ world two years and a half ago keeps looking at everything with the enthusiasm of the first times. And this is the advantage. Because in cycling legs are needed but so is the soul: passion comes from there and maybe the secret is having always a new one. 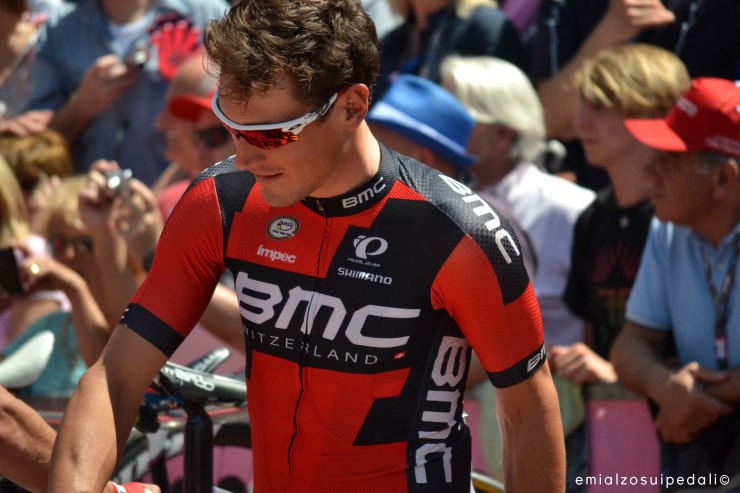 When I ask him if he has a lucky number he replies no. He doesn’t have any kind of charms. “But” he clarifies “even if here at the Giro I am the 46, a number I like is three. Because my surname starts with D and often in the lists of the team’s racers I am the third”

Little things that to Silvan, probably don’t matter. Somewhere I read that going through the road the gaze should be kept always towards the horizon, so it’s easier to get there.
Silvan who keeps his grey-lightblue eyes fixed at his horizon, beat fellow that loves pasta, the beer with friends and tries to enjoy the life to the fullest. Silvan that shakes my hand again in the light of a lake always bluer and goes up to his room to commit himself to masseur. Tomorrow is another day and he will keep riding as he did till now, even better. Always without headphones because, basically, he is right: the best music we can listen to is around us.
While we live.

THANKS to Silvan Dillier and Sean Weide for the time and the kindness.